Pedestrian collisions occur every day; in fact, a pedestrian is killed every 1.6 hours and injured every 7.5 minutes in traffic crashes.

Accident reconstruction experts at Collision Reconstruction Consulting are retained to determine what happened in pedestrian collisions by analyzing the physical evidence, that may include vehicle damage, hair deposited onto a car’s windshield, tire marks, rest positions, shoe scuffs, or a blood pool from the pedestrian.

There are three main stages in a vehicle-pedestrian collision:

1. Momentum transfer from vehicle to pedestrian;

3. Pedestrian sliding and tumbling on the ground to rest.

The “throw distance” is defined as the total horizontal distance that the pedestrian is displaced from the point of contact to rest. 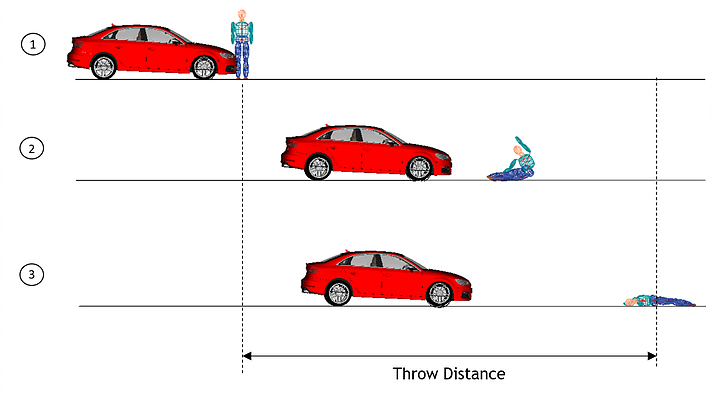 On the other hand, a forward projection occurs when the pedestrian’s center of gravity is above the leading edge of the vehicle’s hood. Common scenarios include the front a sedan/SUV making contact with a child, or a truck striking an adult. In this case, the pedestrian would be projected onto the ground in front of the striking vehicle.

From a liability context, a common question that gets asked is “Was the driver operating the vehicle at a safe speed?” A reconstruction expert can calculate the impact speed of the striking vehicle using analytical methods. Based on staged crash tests and real-world collision data, studies have demonstrated correlations between the impact speed and pedestrian “throw distance” for wrap or forward projection collisions. Accident reconstruction experts use these projection distance models to predict a range of impact speeds.

Many modern vehicles are equipped with Event Data Recorders (EDR), which can store valuable information about driver inputs leading up to a crash. Unfortunately, for accidents involving vehicles impacting pedestrians, the chances for data to be captured by the EDR is limited. This is due to passenger vehicles outweighing a typical pedestrian by a factor of 10 or more, so the crash impulse would not cause an appreciable speed change to the passenger vehicle to trigger an EDR event. This limitation is further compounded by recent legislation that requires vehicles manufactured after September 2012 to report crash data only for events with a “delta (ΔV) equal or exceeding 5 mph in the longitudinal direction over a 150-millisecond period.” The striking vehicle would need to be traveling at high speeds during impact in order to achieve a speed change of 5 mph or greater in pedestrian collisions.

However, there is a commercial tool, TIS Techstream, for Toyota, Scion, and Lexus vehicles where “crash-related” data can potentially be retrieved from the Vehicle Control History (VCH) for select vehicle models with model year 2013 and later. Unlike the Bosch EDR system, there is no ΔV trigger threshold requirement.

The VCH triggers based on system-related events (lane departure, pre-collision braking, or ABS activation) and driver-related events (sudden braking, sudden steering, sudden acceleration). The VCH stores data such vehicle speed, engine RPM, throttle opening, acceleration, and steering for 5 seconds prior to an event and 5 seconds after an event. For each event, the associated ignition cycle, date and time according to the GPS system, event triggered, and odometer are recorded.

When a car collides with a pedestrian, we expect the driver to respond by applying hard braking immediately after collision, thus triggering a VCH event. Pre and post-crash data from this type of event can potentially be recovered using the Techstream tool, whereas it would not be recorded by the Bosch EDR system.

Another question asked when determining liability in a pedestrian collision is “Could the driver have avoided the collision given the circumstances in the actual incident?” To address this issue of avoidance potential, the accident reconstructionist will determine the time-distance relationship between the vehicle and pedestrian before the collision, and then consider scenarios for avoidance, either by braking to a stop or swerving. Accident reconstruction experts work with human factors experts to determine an appropriate response when evaluating driver avoidance potential.

Statistics show that human-related behavioral factors are the single most important cause across all traffic accidents. Human factors experts use scientific knowledge of psychological principles such as thinking, attention, and perception to understand how people interact with, and react to, the environment. Indeed, epidemiological analyses, case studies, naturalistic road observations, and simulator experiments are revealing the general trends about various factors that impact reaction time in the context of driving performance.

Various factors influence driving capability by shaping perception, judgment, decision-making, and reaction time. Factors such as inexperience, advanced age, disability, and chronic disease can reduce driving capability for an extended period of time, while fatigue, temporary distraction, and acute stress or drug intoxication are typically associated with short-term reduction of capability. Also, perceptual and cognitive factors including driver expectation and roadway visibility may be involved in a particular traffic accident.

Driver expectation influences the ability to react and apply the brakes. For example, the unexpected onset of brake lights or traffic lights will lengthen the perception-reaction time (PRT), while mean PRT will shorten if the driver is expecting for braking to ensue or the traffic light to change. The total PRT is highly variable and depends, in part, on both personal and situational factors such as drivers’ alertness, time to collision, road lighting, and traffic density. For example, there is no need to act quickly at a longer distance, slower speed, or both. Thus, both the precise traffic situation and the urgency of the situation need to be considered.

The total duration of the brake response time is composed of a number of components that are arranged in a sequence.

1. Perception time and mental processing: In this context, it is defined as the time required to detect an object and to initiate a motor response. This component can be subdivided into sensation (i.e., detecting an object), perception (i.e., recognizing the meaning of that object), and the response selection and motor programming (i.e., deciding on a response and nervous system programming of movement).

2. Time of motor movement: This is the time it takes to perform the programmed or required muscle movement (e.g., foot relocation time).

3. Device response or mechanical movement time: This is the time it takes for the physical device to respond (e.g., the time it takes to bring a vehicle to a complete stop due to physical forces such as gravity, speed, and friction).

To calculate total stopping sight distance, we need to account for the distance that the vehicle travels before the driver applies the brake due to PRT needed to respond, the time required for the brakes to engage when brake pedal is depressed, and the stopping distance once the brakes fully engage to provide their maximum braking efficiency. The total stopping sight distance created by human PRT depends on various individual and environmental factors, and also is contingent upon speed and braking capability of the vehicle. Thus, the time needed to respond to a stimulus while driving must be estimated correctly.

There are three separate subsystems of memory in humans: short-term memory, working memory, and long-term memory. As but one example, working memory is more heavily taxed if an individual engages in cell phone use while driving. This working memory load associated with performing different aspects of the task is referred to as cognitive load. Certainly not an exhaustive list, but below examples illustrate the load effect.

1. In-vehicle technologies: The use of displays or cell phones is distracting (even the use of a hands-free device, which does not require visual attention) because it increases the total amount of cognitive processing, which is known to interfere with driver’s attention, and therefore with driving performance.

2. Passengers: Conversing with other vehicle occupants is a source of driver distraction, which has the potential to degrade driving performance.

3. Road environment: High cognitive and perceptual load due to reduced visibility of the driving scene can influence visual attention and, as a result, impair detection of relevant targets such as pedestrian crossing the street.

Human factors experts must use the evidence available to them and rely on peer-reviewed published data to investigate potential factors that could have contributed to, or caused, this accident.

1. Time of day: A shorter PRT is typically observed when traveling during daytime.

2. Topography & locality: A shorter PRT is typically observed when traveling in a residential area, as well as when approaching an intersection.

3. Conversing with passengers: This secondary activity is distracting because it competes for driver’s attention, which affects visual scanning and information processing capacities such as decision making and reaction time.

4. Complexity of conversation: The mental workload is high due to the nature of the conversation (i.e., discussing a physical location). This cognitive process requires mental imagery, and thus influences visual attention.

Understanding the relative positions between a vehicle and a pedestrian leading up to a collision can help parties determine liability. This can only be achieved through analyzing the physical evidence that’s been properly documented. Accident reconstruction experts take into account factors such as the vehicle shape, braking activity, geometry of pedestrian, impact configuration when reconstructing pedestrian collisions. Crash data is typically not recorded in passenger vehicles during pedestrian collision events, but a dealer diagnostic tool can be used to potentially recover crash-related data for newer Toyota, Lexus, and Scion vehicles.

PRT/brake response time was likely influenced by the presence of passengers, as well as by the nature of conversation. Peer-reviewed data and case facts, and the use of widely accepted scientific methodologies, enable human factors experts to identify the correlates, and, potentially, causes of the accident, as well as to offer advice on reducing unsafe driving practices. The application of knowledge about human behavioral and cognitive characteristics, abilities, and limitations provides an in-depth understanding of how drivers perform in various traffic and road conditions. Taken together, accident reconstruction and human factors experts collaborate to analyze whether the pedestrian collision can be avoided and whether the driver’s response (if any) was appropriate.